Vulgar Comedy and its origins in Scandinavia (Part 4)

While the Danish Vikings went to England and France to raid and concur and the Norwegian Vikings colonized Iceland, Greenland and North America, the Swedes went east to make business, to form Russia and took jobs as in the Varangian Guard, the lifeguard to the emperor in Constantinople.
The first described theatrical occurrence performed by Swedes is the so called ”Gothion”
and ”Alphabetarion”. They were performed in Miklagård (Constantinople), c:a 953 AD by Vikings. It was songs and dances.
There were two groups of musicians and performers in masks and animal hides and with shields and wooden sticks. They were led by a Master of Ceremonies. They sang and danced in front of a seat of honor full of Byzantine potentates.  The groups danced around their ceremonialist beating their shields with their sticks. 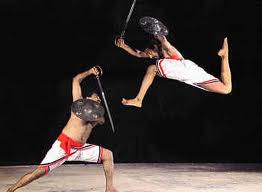 This sound to me like Vulgar Comedy where communion is emphasized and the Master of Ceremonies participate to serve the dancing, which– in Miklagård – is taking up in a court tradition where the dancing is performed before a chosen audience.

Another important work for theatre in the Viking Age of Scandinavia is the Poetic Edda, a collection of mythical and religious poems. There are two sorts of poems. The first is told in imperfect tense and in third person, while the second one is told in present tense and in monolog or dialog form. There are characters like gods or heroes, they talk and are written in the meter that is meant for songs and magic spells. 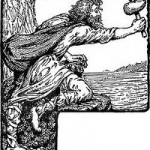 In the poem ”Lokasenna” (Loki’s quarrel) Loke accuses the gods of moralistic sexual
impropriety, among other things, until Thor comes and throws him out.
In Hárbarðsljóð (Lay of Hárbarðr) the rude and obnoxious ferryman Harbard (Loke or possibly Odin) and Thor compete in a contest with one other. Thor wants to cross the river but Harbard mock him and boasts of his own sexual prowess, his magical abilities and finally refuses him passage. 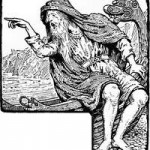