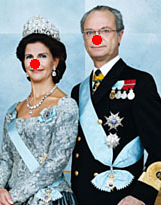 Thinking about nobilities, they are fun. Kings and queens are just the same kind of outsiders as usual clowns who looks at the world and doesn’t understand it, with the exception that nobilities are looking at the world from above.
Here is a list of similarities between royal and common buffoons:

They are in many ways a part of Vulgar Comedy nowadays in countries where they are no longer are in power. I would not go as far as compare them to the Carnival king who really has the power to turn everything up-side-down and who are elected by the participants.