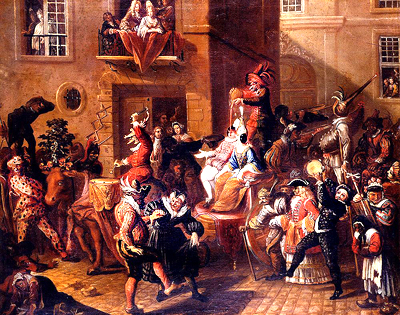 The church was not just a religious building during the middle ages and the renaissance. It was also a cultural center where one could very well be engaged in worldly matters, despite protests from the priests. For example the cathedral of Aarhus in Denmark was used as a ball house. This was naturally since there were no other indoor spaces big enough.
Seeing the church as also a cultural center it is getting the church closer the theatre. We have already mentioned the Feast of the Ass “festum asinorum”, the Feast of Fools “festum stultorum”, the Easter Laugther “Risus Paschalis” and other feasts within the church. Let’s have a closer look at them.

These were part of other church ceremonies celebrated by the clerks, in order to provoke laughter among the church visitors.
The Feast of the Ass, the 14:th of January, was a part to the long lasting Christmas celebration. It was a salutation to the donkey that took Virgin Mary to Egypt. A donkey were put by the altar and a parody mass was held. When it was supposed to be singing a great squeak was heard from the audience and instead of benediction the priest let out a donkeys squeak three times, instead of “amen“ there was a another squeak and so on. The donkey is also a very old travesty on God. 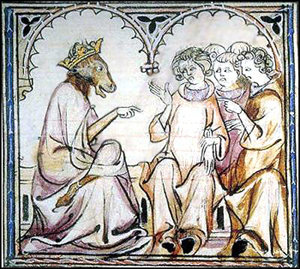 The Feast of Fools could be celebrated on Saint Stephen’s day (Boxing day), The day of the Holy Innocent (28 December), New Year’s Day, Epiphany or on the Birthday of John the Baptist (Midsummer’s Eve) to remember the children Herodias killed. It was the clergy and the younger priests who arranged the Feast of Fools.
The scenario in the Feast of Fools was relatively loose. It was foremost about an idea built on the thought of an anti-community. It was first of all mocking and a degradation of the church rituals and its static order and hierarchies. It was dancing in the church and in the streets, the priests wore masks and women’s clothing, the mass book was carried up-side-down, the vestment was dress back to front, instead of blessing the congregation it was cursed. In the same manner as in the Carnival a mock bishop or pope was elected. He led a solemn service backwards and also led the procession through town. In some places the clerks rode in wagons full of excrement, after the ceremony, throwing the excrements on the following crowd. (Throwing excrements goes back all the way to ancient Greece and the satyr plays.) Another important part of the Feast of Fools was masks and disguises.
In Lombardy they used a professional jester, whose function was to, under great pageantry, wearing a mask that caricatured the bishop. Then from his hand he got a vestment. Dressed in it he imitated and put up a ceremony where he took up all the sins the bishop had committed that year.  The audience demanded total mockery and abasement of the bishop. Later when the bishop got back up in the pulpit no one could hold back their laughter whatever he said.
It is said the archbishop Guido da Brescia after being mocked at the Feast of Fools wanted to ban the feast. But he had to flee from the town and the raging population. And that he could not return until the feast was reinstalled.
The jester could feel safe as long as the feast lasted with the protection from the people. But they had to sneak him in, disguised, to the town and then sneak him out again so that the city authorities would not find him. On the other hand it might have been the best paying job that year.
From the start the feast was sanctioned by the church, but gradually – as priests and bishops complained that they lost the respect they wanted – the feast got more and more prohibited. And by the thirteenth and fourteenth century it got thrown out of the church and by the end of medieval ages it was banned everywhere. 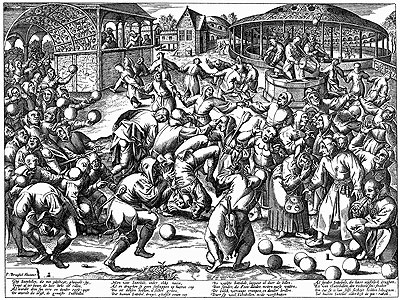 When the Feast of the Fools was thrown out of the churches the clerks started to form amateur companies together with bourgeois other scholars. These companies, who once were responsible for the Feast of Fools and the Feast of the Ass, now got the responsibility for all official festiveties year round. In Italy those groups were called Associazioni Giovanili and had names like Abbazia degli Stolti (Brotherhood of idiocy) or Societá della Gioventú (Academy of Youth). Gradually they started to create primitive performances as part of the festivities. In the sixteenth century, when Commedia dell’Arte was well established they were among the first to form Commedia dell’Arte companies. Just as long after that, one of the most common jobs for Commedia dell’Arte companies was to organize official festivities.