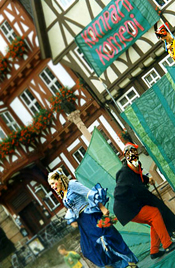 One example of how the theatre was used by the church was in the nativity scene. The first one was shown in 1223 by Francisco of Assisi. From the first puppets where used but soon the roles were played by priests and altar-boys. The villagers danced around the altar and lulled the Infant Jesus. Later the roles expanded with among others angles and shepherds, where the shepherds become the comical characters.
The Christmas celebrations lasted for weeks including Saint Stephan’s day to remember the martyrs, Epiphany with the three wise men, Massacre of the Innocents, the Feast of Fools, the circumcision, the Feast of the Ass and the escape to Egypt and more. All of these scenes from the bible was dramatized and acted out. Soon more or less the whole bible was acted in the churches and when the stories of the bible were not enough there were new motives in the legends of the martyrs.

In the thirteenth century the theatre begin to leave the church interior since it was too dark and not big enough anymore. The audiences grow and the new stagecraft that was used took too much space. The Mystery Adam, from 1150, is the oldest performance we know to be played outside the church. It was also the first play to not use Latin and the first play to use talking word and not just be sung.
The theatre of the church seeked for new spaces, they started to play out on the church stairs, the plazas, and the graveyards. The graveyards were great places since the priests, the nobility and the posh people were buried within the church. It was only the simple graves out in the graveyard, so it was not considered a profanation to play there. The graveyards were also cool places under the trees and since they were fenced it was easy to see how came and went. 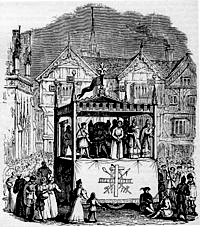 When the theatre moved out of the church room and out among the people an independence process, a profanation and a vulgarization of the theatre begun. Also the acting style changed, the gestures became bigger, silences disappear, the language became rougher to adapt to the language of the street. Also the cruder stagecraft began to adapt. For example when Judas hang himself a big black bird is let loose and a large chunk of intestines is pouring out of his abdomen.

It became the mystery plays and the passion plays, but the biggest of the plays that came out of the church was the Corpus Christi created as a festival by Pope Urban IV 1264 in honor of the union of the human and divine in the person of Christ. They encompassed the whole biblical history and could take several days to play. Perhaps the most known is the Ludus Christi that was played in Cividale in Italy at Pentecost 1298 and took three days to play.
From the beginning it was the priests that played the major parts, but since it demanded more and more people on stage the students and commoners got involved. But also professional jesters, jugglers, dancers and minstrels were employed. They brought in a more secular view on theatre. The plays became more a matter of the people than the church. In the beginning the priests acted in Latin while the rest of the actors talked their mother tongue, but as soon as the fourteenth century the Latin was gone in France.
Another example is the French basochiens. It was from the beginning assemblies of law students and civil servants that by the time become regular event manegers and comedy groups. As soon as the fifteenth century they had an important role in most official festivities in Paris. They were even working in private events. Among all the occurrences they were part of like parades, games and jollifications, their special event was a mock court, where burlesque summons and prosecution. And here we also have one of the most famous farses: Farce de Maître Pathelin.