There are very many dogmatic views on Commedia dell’Arte out there. It seems a lot of people want to confirm their own view or they are having their own political or artistic agenda that they want to impose on others.

There is three aspects to understand before one says what Commedia dell’Arte was or is though:

Besides that, the only written descriptions we have of Commedia dell’Arte from its heyday are written of the nobility and the elite at the courts around Europe. They were the only ones that could read.
The exception is what is written by priests about the less fortunate groups that played in the streets. But those priests wrote to the authorities to make them forbid the groups to play or throw them out of town. They are not talking so much about what happened on stage but more about the unmoral and unchristian lives of the actors. 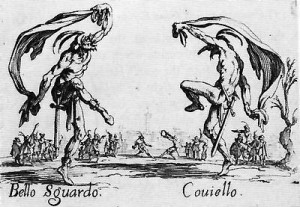 So what we have is enormous chronological, geographical and social differences in the styles of commedia dell’Arte. All that is described either by priests who depicts the actors of Commedia dell’Arte from its worst sides or or by an elite from the courts who came to see very different performances then common folks.
It is from that information that we, today, can form a view on what Commedia dell’Arte once was. And that is our benchmark when we develope Commedia dell’Arte.

This is the fourth part in a series of six from a seminar I held at the Royal Dramatic Theatre in Stockholm about Commedia dell’Arte and its relevance in a modern context
See also Part one, two, three, five or six.