As the mask enhances the bodily expression both visually and by size it also compels a more direct communication from the stage. A communication that becomes stronger in its expression and allows a comedy that goes straight to the guts of the audience. 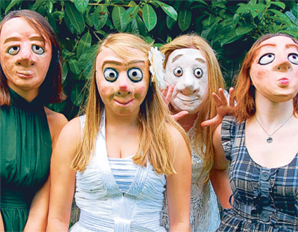 It seems to me that the size of the movement and the tempo of the mask are reflected in the audience’s reactions. It naturally always has to be movements from the guts of the actor, so it doesn’t just become waving arms and legs. The visual image in a masked show is faster and easier to assimilate and becomes emotionally evident for the audience. I simply don’t leave room to intellectualize what we see.
As an example: when we see a Pantalone with his characteristic walk of an old man, his posture centered round his genital organ and his purse, we perceive who he is in an instant. Therefore we immediately can follow his actions and the situations he becomes trapped in. These actions becomes, forced by the mask, all the time visually explicit. This leaves the masks to go straight from on action to the next without explaining dialog or episodes. And, once again, this doesn’t leave the audience room or reason to intellectualize the image since in is already obvious. When the audience is not given the room to, with their intellect, filter emotions that arises the performance on stage becomes stronger.
Of course this goes for all physical, visual theatre, but I mean that the masks helps it, not just because it forces another stage language, but also for what it contributes to the image on stage. 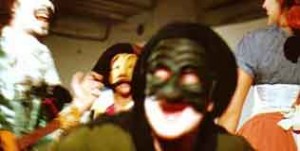 The mask can also go the other way by presenting an image very slow for a long time and that way force or attract the audience away from intellectual interpretations. When the image move slow or repeatedly enough there are no longer any thoughts left to ad and the image is left alone in its beauty, a little like it is with music.

2 Responses to Why mask?