Since Henri Bergson has such a great impact on studies about Laughter and Comedy I’ll bring him up even though I don’t really agree with him in everything. My inspiration comes more from people like Mikhail Bakhtin and Anthony Caputi. 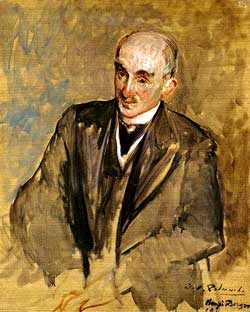 Henri Bergson builds his theories on two ideas.
The first one is about mechanics and how we see comedy. He means that if a person, who doesn’t see the world around him or her, who is continually walking, talking, thinking or behaving the same way without changing or adapting to the situation or to other people, is funny.  This has to be done in a way that the spectator doesn’t get emotionally involved. If he does, he pity the person behaving in that stiff mechanical way.
The second idea is about how laughter is used as a tool for punishing those who don’t follow the unwritten rules in society. This social control can be used as a weapon pointed to outsiders and make them adept to society’s regulations, written or unwritten, by fear of being made a fool out of.

As I have written before (See HERE) I think the comedy is more about the struggle to come back after falling or slipping, either in a direct or indirect meaning.

One Response to Henri Bergson and Vulgar Comedy