I will try give a little resume of my professional life on this page. But if you want to read more detailed information I suggest that you click any of these headlines, where you also can find some videos and press clips: 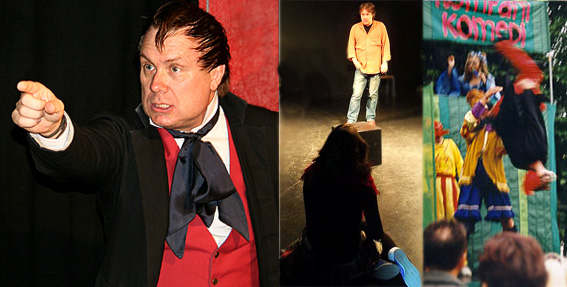 As mentioned before most of my work is as director and theatre teacher. I am also artistic director for the Theatrestudio – a Swedish education in physical theatre – and Kompani Komedi – Sweden’s first Commedia dell’Arte group.
I base all my work in theatre on ”physical theatre” in general, even though I don’t really like the term itself. A lot of that is Grotowski inspired theatre, but my special interest is Commedia dell’Arte. Something that also led me in to the broad field of Vulgar Comedy itself, which is what this blog is about.

To take it from the start: I was one of those “clowns of the class” in school that were responsible for the amusement on Friday afternoons. I spent most of my time in school being part of a number of big musical projects. I took part in theatre groups and cabarets. One period I worked as a drama teacher for younger kids.
I quit school after eighth grade and started to work in an office. After working there for one year I got an.
Luckily I got saved by a acting job for Swedish national TV. It helped me on to the ”right track”. I went back to school adult school. I studied off and for 7 years. But what I really did was spending my student loans traveling around the world. But it was not until 1985 that I seriously started working in theatre. 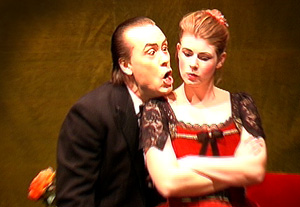 And down here below I have made a short summary of what I have been doing since then:

At the same time I have taught a lot of workshops and seminars, held lectures, deputized at different drama schools and been guest teacher. I have also directed various theatre groups, written and dramatized plays and performed myself in smaller context etc. Besides that I have made masks that I have sold in Sweden and in the US.

3 Responses to About Micke’s CV