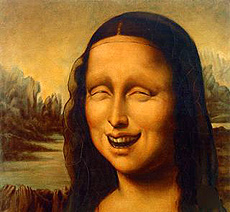 After I have realized that I used the words laughter, humor and comedy a lot in this blog I thought it is time to define the words, or at least how I use the words in connection with Vulgar Comedy. To me these words are three different aspects on “funniness” in lack of a better word (click the words to let me explain my thoughts about them):

Laughter – I see laughter as both a culture and an expression of joy or the result of comedy. The culture of laughter is much the opposite to the culture of humor.

Humor – Here we talk about the basic fundaments to both laughter and comedy, but the term also is the opposite of them.

Comedy – To me comedy is the practical side of it all. It is how to make people laugh and what make us laugh.

Off course there are other words to describe the subject with too, such as amusement, comicality, happiness, entertainment, hilarity, mirth, enjoyment and so on, but it is mostly these three words that are complicating the understanding of my point of view of Vulgar Comedy. That is why I think they need some extra attention.

There are also a lot of THEORIES OF LAUGHTER whom I want to talk a little about.

6 Responses to Laughter, Humor and Comedy