Anyone who has read Asterix, the French comic albums, knows Unhygienix, the fishmonger in the village, and how he is shouting to sell his fish. In one episode he got a competitor. The competitor started to shout loader and, since it is in Asterix, the whole village started a fight.
If it wasn’t for that it was in Asterix it could very well be that the costumers went to the fishmonger who was the most sympathetic or funny, wish would lead the other fishmonger to come up with something even funnier, then the first fishmonger might started telling funny stories or even acted them out to some extent. That led the other fishmonger to hire an actor to draw attention to his stand, and so on…
Finally there where complete pieces of theatre among the other stands in the market, all of them in their own level of theatrical development. 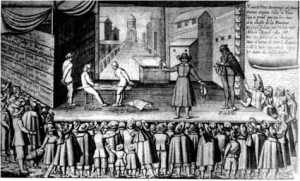 Charlatani
We can also see lots of renaissance images from markets with Charlatani selling goods, accompanied with acrobats or masked characters, sometimes also a Servetta.
They used the same way as many street artists do today all over the world to get paid. They first started out a show to gather people, and then they waited to play the show until they had sold out their goods or got as much money as they wanted.
The Charlatani (means mountebank, and later became the word charlatan in English) was the street salesperson that stood role model for Dottore. He, or they when they where Charlatani troupes, was the lowest in the hierarchy of Commedia dell’Arte troupes. As the term Commedia dell’Arte was not used yet the groups that played on the streets and markets where called Charlatani troupes when the church wrote about them. And they wrote in order to show them as vulgar, perverse and irrelevant both in their acting and in their way of living, so that they forbidden to play their shows.

The Language of the Marketplace
Michail Bachtin speaks about “the language of the marketplace”, how people lived their lives on streets where the hierarchy of the institutions didn’t exist and how the people were constantly together. Expressions like “I need my own space” were unthinkable.
In that environment a language grow. It was full of rough, obscene, ambivalent insults and curses given in a friendly way (just like today when we can call someone we like “you old fool” or so), it was referring to food and drink and sex in large quantities, and it was always full of laughter.
As a matter of fact people at the time did not trust seriousness at all. That was the language of the powerful, of the sycophants, the liars, the hypocrites; it hid violence, fear, greed, threats, weakness and prohibition. We are talking about the seriousness that build dogmas, strengthens authority and always carry I threat of violence, not about death or sufferings in one’s private life.

Neither were the marketplaces of the time a quiet place. The expression “cris de Paris” is about how each monger had a special jingle or chant in four lines that gave them their own rhythm, intonation and melody. One could hear whatever goods were sold in each stand long before one where there.
It is in that noise and in that environment that Commedia dell’Arte was born.

Go back to THE ROOTS

6 Responses to The Market