The power has always wanted stagnant values in comedy or in art as a whole. It promotes static hierarchies, eternal truths and strict morals in order to preserve its view of the world. It is a view where every change is a threat to present society and the existing order of things.
Vulgar Comedy on the other hand is the voice of the people; it advocates an ambivalent, flexible, open worldview; it has no interest in a stagnant world. Whenever Vulgar Comedy loses its ambivalence to the rigidity of morals, whether it is in resistance of the power or for moral or ethic reasons, it also loses its strength and eventually dies. 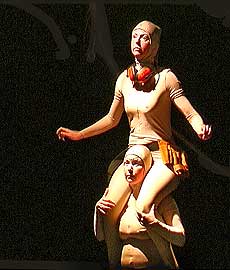 By this ambivalence Vulgar Comedy also helps us to see things from more than one side. It always tells us about “the other view of the world” as Michail Bachtin puts it. That is the view that has not been presented to us before by media or the authorities.
If one takes for instance the biblical story about “Bileam’s donkey” and tell it in the view of the donkey we will not only get a new angle of the story. We will see Bileam, not only as ignorant, but also as a bully who torments animals, not to mention our new angle on the angel… The world will be comical. We laugh at the funny characters, the stupid situation, but also at the new angle of the story and our perception of it and how we were blind to it before.

In this way Vulgar Comedy is closing in on postmodern theories with its relative values, where hierarchies are non-static and morals are in the eye of the beholder. The folkloric tales, rites and ceremonies that Vulgar Comedy is based on were always relative.
Even the post-dramatic plays of today are nearing Vulgar Comedy in both its style and its content. There is never the plot that is the most important if there is a plot. There are no scenic world created that cannot be torn down at any time. Characters are not psychological portraits of people and actors may very well leave their characters for some time. The similarities between Vulgar Comedy and post-dramatic theatre are plenty, but I thing I will come back to that later in another post.

One Response to Ambivalence in Vulgar Comedy