Vulgar Comedy and the Church (Part 4 – the Diavolas) 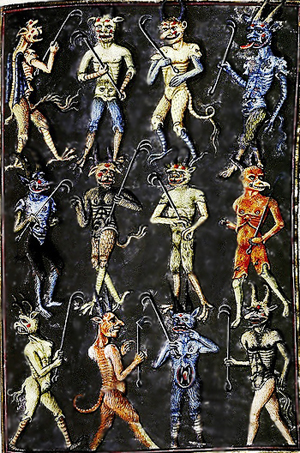 The Corpus Christi was celebrated with carnival festivities, comical rites and dramatic performances. It was not just the performance it was just as much the feast itself. In the long run people got tired of long serious plays. They wanted also to laugh not just be educated. Laughter was also the only thing the common man could trust in a time where seriousness always was a tool for the authority, when hypocrisy, torture, dictates, power and prohibition were the language the authorities talked to the common people. (See Bakhtin)
People could show their disapproval by throwing chestnuts and other things at the actors, often there was big fights. In order to please a crowd who demanded laughter and comedy comical and burlesque elements was incorporated in the plays. In France it often developed into just raw blasphemy.

This is where the diavolas, or devil plays, comes in, and gotten more and more room within the plays. The diavolas was the comical parts of the mystery plays where the devils played the leads. They were anxious, ambiguous and incomplete as life itself, in contrast to Jesus and the angels who are stands for balance and perfection, even to the humans who are created as the image of God.
Jesus and the angels may be as good and pious they want, but they can never be comical as long as their existence is depending on their seriousness, and that they are taken serious by the people. 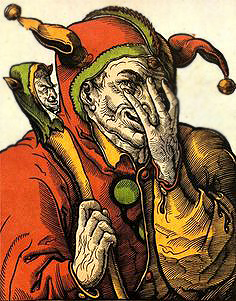 Comedy and Laughter is built on unbalance, both literary and metaphorical, and the struggle to get back to balance. It is elusive and represents deflection. When Chaplin is struggling for five minutes to reclaim his balance in a pair of roller-skates he is one of us who, in the most ridiculous ways, struggles to reach our goals in life. If Jesus would have done the same thing, he would no longer be a God. Therefore Jesus and the angles are always representing seriousness. And by seriousness they are also representing the power (both the sacred and the secular) when claiming the eternal and the stabile.
The devils on the other hand are not tied to seriousness and can therefore represent the people in their insufficiency and with their gay laughter.
In popular culture hell was also looked upon in another way. The sterile eternity that represented perpetuation of the past was, the dead, against the earth and the underworld that represented the fertile bosom, death meets birth and new life is generated. Or to recite Bakhtin: -“Hell is a feast and a happy carnival.”

The diavolas were very popular as the most comic and burlesque part of the plays. The devil could also be let out in the streets and squares to roam around free before the plays, sometimes for several days. Then they also were free from the ordinary rules in town. There was an atmosphere of unrestrained freedom around them.
The devils could allow themselves to be satirical and sometimes even political. They could always hide behind the idea that they were devils, besides it was still a church event and one could always find support in the Bible.
By the time, the diavolas became, in some places in Europe, stand-alone performances that were played independent from the Corpus Christi and the mystery plays. It was usually under the carnival or other similar festivities.

It is also here where we hear the word mask for the first time in Europe. The word, that comes from Arabic and means clown, prankster, jester or rouge, replaced the earlier word larva meaning ghost or maggot.