Mickes shows at The Studio Ensemble

Here are some of the shows presented by The Studio Ensemble: 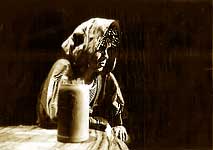 opened in 1987, was created from the book by Pär Lagerkvist and not from the script. It was built in three parts. The first one takes place in a medieval inn where the Hangman sits as one of the guests in a corner. It was played in half masks. The second part takes place in a nightclub in a mixture of modern and pre Nazi time. The Hangman appears here more like a god or a Greek hero in humanity’s adoration of violence and evil. The last part is a long speech by the Hangman, where he explains his task, his lack of understanding for love and his own wish to obliterate. 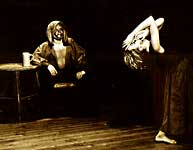 I played the lead and Ulf Ekeram directed the performance with the assistance of Lars-Åke Kastling. 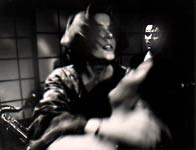 was created, 1998, by the Ensemble under the guidance of Lars-Åke Kastling and with texts from, among others, Monica Braw. The performance was about death and fear for death in general and about Hiroshima more particularly. It was a very physical performance made in the form of a collage.
No one in the ensemble played any named role. The characters were worked out after the actors in improvisation and training instead. 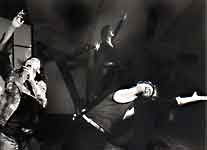 was a Commedia dell’Arte shot that played the summer of 1988 and the first Commedia dell’Arte show that I played in. It really acquired the taste for it. It was a long performance (45 minutes) to be a streets show. The plot was a very simplified allegory about immigration in Sweden. It took place in an anthill that needed help with the egg-laying.
Lars-Åke Kastling was directing this show too. I played ”Bullen”, a sort of Swedish Arlecchino.
I have unfortunately not found any pictures from this show. 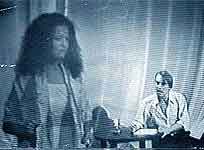 by August Strindberg, opened in . This was an experimental performance with only four actors, the set was a big cloth and we also used puppet for the deans.
The director was Bitte Unelius. I played the Lawyer, the Quarantine master, the Glazier/the Father, the Billposter, two of the deans among others. 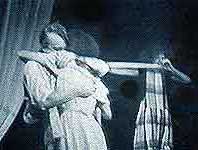 Var är Toaletten? (Where is the toilette?),

from 1991, a collage or rather cabaret based on Gregory Corso’s poem ”Marriage”, but also with texts from Tom Waits, Povel Ramel, myself, Charles Bukowski, Tom Lehrer among others. It was all about the agony to decide upon whether to marry or not, played by only two actors.
This show has never been played as a whole, even though all the parts of it have been played at different times. I and the ensemble gave and took directions.

One Response to Mickes shows at The Studio Ensemble