Grotesque as an acting style in Commedia dell’Arte

This is naturally an acting style that was “in fashion” in the renaissance and the early baroque eras, but must also remember that Commedia dell’Arte has its roots in the carnival and the market, and the language of the market squares was bigger, louder and wilder than in ordinary life. When we talk about an acting style “in fashion” we must have in mind that at the time Europe was not yet over civilized. The Victorian ideals have not yet been spread in Europe. Since people lived so close upon each other things like physical defects, human odors, excrement, sex, farts, spit and sweat were part of everyday life. Just as we probably would feel physically ill being in a street scene from the renaissance, someone from the renaissance would probably see a western city of today as a clinical hell. 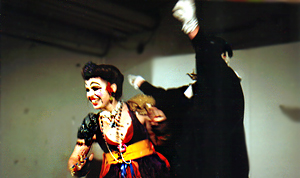 A very common reaction on Commedia dell’Arte is that it is too crude, too grotesque, that the vulgar in the shows are too obvious. From different directions we are asked for circumlocutions and hypocritical moderations instead of simplicity and clarity. But Commedia dell’Arte does always express itself “straight on” without decorations or idealization. 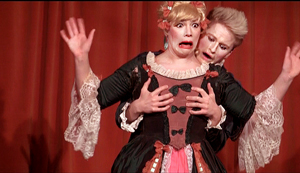 Commedia dell’Arte neither does nor demand any special intelligence or greater sensitivity then common folks from its audiences. It doesn’t even work if we first have to interpret or analyze before we can understand it – it is direct laughter. It seems as if there requires some sort of extra degree of unintelligibility for a work to be seen as “fine culture”, as if laughter was a less deep emotion. This is a part of the discussion about literary theatre versus physical theater and vulgar comedy In general.