Prolog or opening in Commedia dell’Arte

The introduction to a Commedia dell’Arte show in very important. It does not only have to present the different masks so that a modern audience will know them at an early stage in the show, it must also introduce the acting style with its big expressions and frenetic energy. This is especially important when we are playing indoors since Commedia dell’Arte is street theatre and even when we play indoors we must somehow keep up that energy to still be in the genre.
We ought to count on that the audience have never seen a Commedia dell’Arte show before or knows anything about their origins and conditions. They are likely not used to that kind of energy and vivacity from the stage either. The audience often gets scared or they find it annoying with the power that meets them from the stage. They simply need to be introduced to the genre of Commedia dell’Arte before they are ready to accept the show and its context. And if there is someone in the audience who are familiar with Commedia dell’Arte it doesn’t hurt to once again, in a funny way, be introduced to the style.

The function of the prolog is to prepare the audience for the spectacle. In golden days of Commedia dell’Arte the prolog did not have very much to do with the plot in the play. I was more of an assembling function and it said that the show was about to start. I could also be here that the group took the chance to present the play and its circumstances, often in long ironic excuses to the audience.
See Domenico Bruni’s Prologhi from 1621. 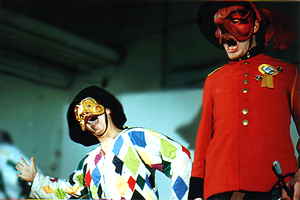 Today a traditional introduction song has often taken the place of the prolog. It is an excellent way to, in body and spirit; present the masks, part of the intrigue and the acting style. It is also a time for all the masks to be on stage together in full energy to set the tone in the show. It can work as a sort of chock therapy when played indoors were the audience get a chance to meet the genre in full energy at once. Then it’s good for the performance to come down a level or two, but the audience will be ready for what is coming.
Another way is to begin at a lower lever and then slowly raise the pace, letting the audience be accustomed to the energy level, speed and size. In that case a traditional prolog can come in handy. 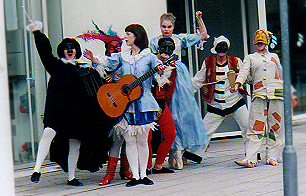