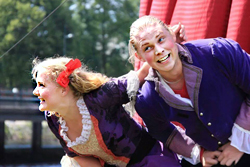 The classical way is to wait until the hat is full before the show starts. The advantage with this way is that once “the hat is full” the actors don’t have to think about it and can concentrate on the show itself. The flip side is that not many people nowadays are ready to give money for a show they have not seen and they might not even have the time to stay to see the show.
The most usual way is to ask for money after the show is over. Hopefully the show has gathered a great crowd. Now people are happy and are willing to give some money for the show. Unfortunately it seldom works that way. Usually most part of the audience sense that it’s time to be asked for money and they leave the show in the middle of the final song while the actors are looked up on stage. So if we want to pass the hat at the end of the show we better promise something extra at the end of the show, maybe even after the final song. Another way is to go out in the audience just before the final song or even the final itself. It may be suddenly in the middle of the show spontaneous or not. Or as a part of the show, for example: “We must have enough money to make the marriage possible (Here is a chance for having another ending depending on how much money it brings). The best way, at least is it what I think, is to pass the hat in the middle of the show. We can’t trust that it is always possible. The actors that are not on stage at the moment can be doing the sound effects, have to be ready to jump onto the stage etc. Another problem that may occur is that an actor who is out in the audience may not be able to come back in time for his or her entrance. We never know what will happen out there in the audience, an old lady may be looking forever in her handbag for her purse; someone starts a discussion with a mask and so on.
One way it to give the audience some kind of reward, like letting someone up on stage or just give the person applause.  This work perfectly in Italy where people seems to love to be in center of attraction, but in Sweden it seems to be the other way around. People are very shy. 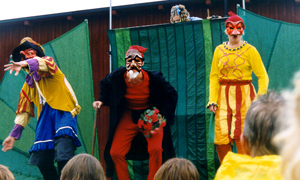 One of the great things with street theatre is that it is free. We shall not forget that. We can never force or demand payment from anyone, doesn’t matter how hungry we are. I guess we all have seen a street artists that more or less demand money saying something like: -“This is my job!”.  As if that was the audience’s problem.