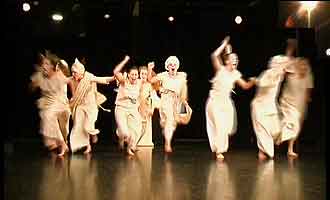 The Bible is a fantastic book for theatre. It narrates exactly what happens in its stories, but never how it happens. In that way the Bible is very open for different interpretations. One just has to remove all prejudices and all the pictures that we have been fed with through the centuries in order to be able to concentrate on what the text really says. 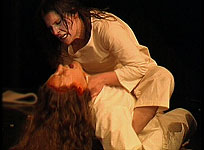 I have directed two performances with its texts from the Bible at the Theatrestudio. Both performances were made in the form of a collage. We spent a long time exploring our own prejudices before we started to build the actual shows in both performances. For example, we asked questions like: Would we look different on Jesus if we knew he was ugly, fat, bold and had a bad attitude? Can God be comical /out of balance when he became incensed? How does the donkey look on the story about Donkey of Bilam? These questions take us in a more interesting and more unexpected way in to “the great questions” like: Is God good? In that case what does God mean by good? Where are the boundaries between church/tradition and religion/belief? Why should we pray to a God that is omnipotent? 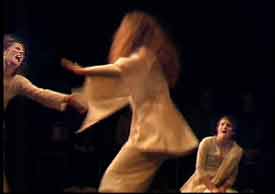 This is the second performance from the Bible that I made with the Theatre Studio, it was played the spring of 2002. We acted free in relation to the text. We used sections of the laws, some of the genealogical tables and the Book of Psalms. We were searching for different ways to say the text, like puppet theatre and ”silent movie scenes”. We also used the fact that the class only had girls and that the Old Testament has an almost complete lack of female characters. And the performance started with the actors washing the audience’s feet. 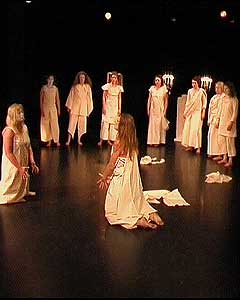