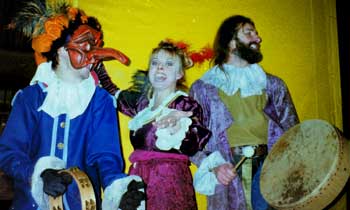 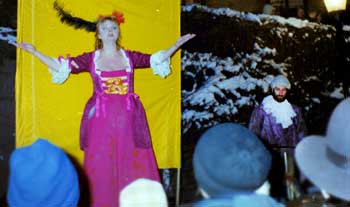 To the turn of the year 1999/2000 Kompani Komedi made three small Commedia dell’Arte shows, played in the Old Town of Stockholm, at the festivities for the turn of the millennium.

They were built on the idea of a Charlatano, which came traveling as a salesman with his helpmates, or fellow players, Signora, Capitano, Zanni and Coviello. The shows took place in three different eras the renaissance, the Swedish Great Power period and Gustavian era. The show was also played in different styles in music, acrobatics/slapstick, and oration. It was played on a small dray with a backdrop and a tiny side stage for the music.