We have to remember that Stanislavsky was a rich factory owner how did not need to make a living from his theatre. He was from the Russian upper classes who despised Vulgar Comedy. So we can count on that he was quite alienated from the mimes, cabaret artists or clowns of nineteenth century Russia. His artistic ambitions were pointed in a totally different direction then Vulgar Comedy. He was looking for truth, authenticity and realism in his art, instead of stories, parodies and fantasy. Stanislavsky was very prestigious and took theatre extremely serious. He was not able to enjoy theatre as a game or a place for wild and free imaginings. As the headline indicates he was in search of a rigid system or method that could answer all the questions in theatre. He also admitted that one thing his method could not do was Commedia dell’Arte since it had another agenda to its art. And consequently that is where Meyerhold started out. 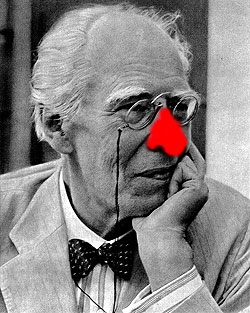 Stanislavsky divided the actor’s craft in three kinds (Excuse me my translation. There is probably a better English translation): “handicraft acting”, “the art of representation” and the “experiencing the role” actors craft. Handicraft acting is the tradition of acting Vulgar Comedy mostly works in. It is the craft that Stanislavsky hated. He could not stand the lack of authenticity and the sense of play in the acting. Here the actor keeps the role outside himself. The actor doesn’t pretend to “be” the role. He shows it for the audience and they create it together. The actor suggests and the audience fills in the rests. This approach to theatre also allows a much bigger and bolder style of acting, masks, storytelling, audience participation and external affects. Presentational acting allows the audience to participate in the actors inner feelings through the external manifestations of them. Just like the handicraft acting it does not care for the actor’s feelings but the audience’s. Even though it is primarily concerned with the inner emotions of the actor it still allows big extroverted expressions. Stanislavsky could admit this to be an artistic style of acting since it was occupied with the inner aspects of acting. Experiencing the role is when the actor becomes the role. His senses are the ones of the role; he is behaving just as the role should in that given situation; his feelings blend with the ones of the role. This is the acting style that Stanislavsky really liked. But it doesn’t do very much for Vulgar Comedy. It is a very good acting style for film acting and other realistic acting, but Vulgar Comedy and everything that claims to be bigger than life has not very much to gain from that style of acting.