Vulgar Comedy and its origins in Scandinavia (Part 3)

The very first signs of any kind of Swedish theatrical activity are found in the Bronze Age finds from the ritual site in Skogstorp and the petroglyphs in Tanumshede, Nämforsen, Oppeby and Norrköping among others. On the stone carvings we can see a lot of cultic rituals, processions, and dance games.
The rituals could be about hunt, weddings, fertility, war or the struggle between the seasons.
In the dance games the audiences could participate while the leading performers conducted the dance and the singing. The most common dance games were those “proposing games” where two young persons of different sex look for each other in the middle of a ring of participants that is helping them with song and dance. The dance games could also be working songs, games or satirical games.
Another (probably) pre-Christian phenomenon, as an evocation against death, was to dance on the graveyards, which led later to the ”Dance Macabre”. 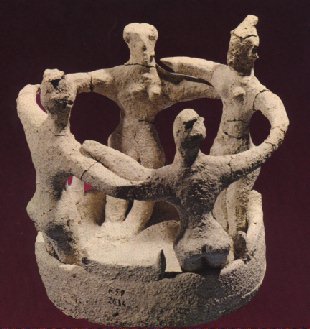 Even if the games occurred in all classes we can still find elements from the popular and very early form of theatre where everyone participates to enforce a happy ending.
In Kiviksgraven (the grave from Kivik), about 1200 BC has been found 17 female figures, of which nine in bird-like masks och later in the so called Osebergaväven (the weave from Oseberga), 835 – 850 BC there are females with shields and boar and bird masks.
This raise questions whether women where participating, and if so, if they wore masks or not. There is on the whole in the history of theatre no mask tradition known where women have worn masks, even though there are several female masks worn by men. On the other hand it is just in Vulgar Comedy women has been participated as performers, in times where women were denied to be on stage, from the Greek mime to Commedia dell’Arte.
In Scandinavia there was no organized religion until Christianity came at around  the eleventh century, and it was long the religion of the elite before it reached down to the common  people. So we could say that it was not until then that the king got his power from god and therefore became responsible to him instead of his people.