While answering the questions I talked about in About mask making I was also asked about how I teach mask. Here are a little of the answer to that. 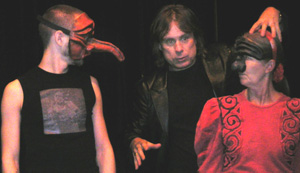 I am not bound to any specific method even though I don’t deny my background, at the Theatrestudio in Stockholm, Sweden or at Dell’Arte in Blue Lake, California. But that put together with a lot of workshops, meeting other theatre professionals that work with mask and of course my own experiences might blend into a mix that one might call a method.
I am a bit allergic to the word though since it indicates something static. I am trying to stay as open as possible and change my way of working constantly. But even so I have to admit that my teachings thru the years has somewhat formalized. Call it a method or call it a relation to the work. 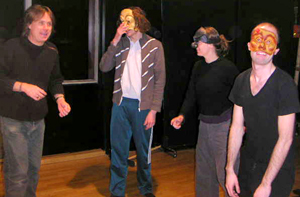 So to give an example I will explain in short a sort of basic approach or structure when I teach Commedia dell’Arte (You can also see my workshop pages):

2 Responses to About teaching mask