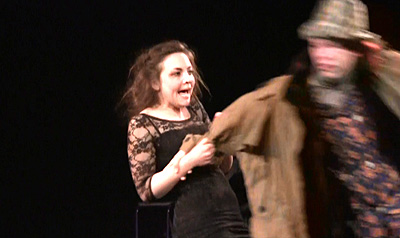 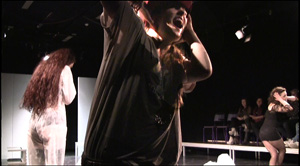 Kattorna is the final show of 2012 for the second year class in physical theatre a Kulturama. The show opened 20/3-2012 at Kulturama’s house in Hammarby Sjöstad in and later it went on tour to the south of Sweden.

The play that was first opened in 1960 at Kansanteatteri-Työväenteatteri in Finland is about female homosexuality, group pressure, solidarity and struggles for power among women and class hatred.
It is only female roles and it takes place in a factory where a tyrannical chief is ruling. One of the women who couldn’t stand the pressure have fled the factory and sold her body, but now she comes back. She accuses the chief for having violated her. That makes the other women to go on strike to have the chief sacked. Until she finally admits that she lied to them…
In our version the focus is on the relation between the chief and the appointed woman and the other women’s reactions to that. We have also chosen to let it be open if the two women had had an affair or not…
This arises questions of vulnerability and oppression among the women. 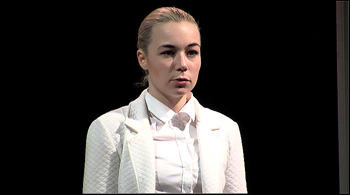 The production presupposes a physical approach to characters and actions even though the style of acting is mostly realistic. The coarse tone ant the intensive acting creates an intimate and, at the same time, violent atmosphere.
In our production takes place somewhere in Europe during the twentieth century, but it is not more specific than that. Also the actual factory can be read symbolic. It could also be a home, a womb or a version of hell.
Kattorna was staged in a half arena stage so that the spectators can see each other and in that way build up the feeling for here and now in the performance. 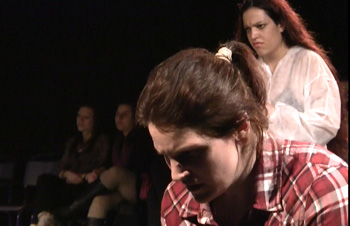 Kattorna was a very strong and intensive show. It was met very positive everywhere it was played, if one can say so about the show since it was not a very easily met performance.

3 Responses to Kattorna (The Cats)