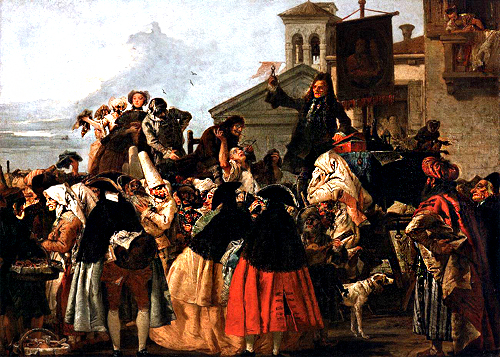 Those lucky Commedia dell’Arte troupes that could play in the salons of castles and palaces had their benefactors, usually a duke or a nobleman over a province. For those actors who were educated it was also relatively easy to find additional jobs. In the palaces they could be musicians, tutors, arrange greater feasts and so on. Even the great Flaminio Scala worked for a while as a perfume dealer.
Those actors could enjoy a better life economically, but they were also more or less serfs and had to obey their master’s whims if they wanted to keep their heads on top of their necks. This can be illustrated by a story from Dario Fo in his book Tricks of the Trade:

-“The French king who had heard people praise an elderly actor who worked for the duke of Mantua wished to see him in Paris. Unfortunately the actor in question was very ill, but the duke gave him orders to get out of bed and prepared the trip. The palace doctor interfered and asked the duke not to insist on the trip: “His medical condition is so that he very well might die before he arrives to his goal.” The duke didn’t listen to such nonsense: “First I would let him draw his last breath then risk that the French king would think that I would not give him the gift that he wish.” So the actor was forced to go in fever and, just as the doctor Had said, he died as he passed the S:t Bernard pass. Politeness had prevailed. The French king was, no doubt, touched gesture of sublime sacrifice from his generous vassal, the duke – generous with one of his actors life.”

The actor’s background were varied. Some like, Flaminio Scala and Francesco Nobili were noblemen and move in elite circles while for instance those who wrote the first contract we know in Padua 1545 probably where craftsmen or lower commoners.  By time it seems that the demands and the play of Commedia dell’Arte bridged the social span between groups. Even in the most famous groups there was actors from varied backgrounds. From the courts and the learned circles came singers, poets, playwrights, and courtesans like Flaminio Scala, while others came from the streets and were charlatani, musicians, jugglers, acrobats, dancers, jesters and mimes as Barbieri and Silvio Fiorillo. They were all forced to adapt to new circumstances to be able to life a life within the professional theatre.

The fact that many Commedia dell’Arte actors were educated and more socially accepted than earlier popular entertainers must have been one of the keys to their acceptance in the finer salons. That must have in turn have helped to generate even more Commedia dell’Arte groups when they saw a possibility to move upwards in society.
Pretty soon the groups who had succeeded, economically, socially and culturally, distinguished themselves from the other groups and new hierarchies were made in the world of Commedia dell’Arte. Those who had succeeded in being famous and got a place in a greater court became traveling institutions of the time. They had another economic situation and other resources; both artistically and practical; they were recognized everywhere both socially and artistically; with their contacts it was much easier to deal with bureaucratic hassle, the suspicion of the clergy and problem with the police and borders between nations and states; it was easier to book halls, find actors and so on.

Many Commedia dell’Arte groups were extremely famous and had a high position in society. Just to mention, Isabella Andreini from the Gelosi, Europe’s first megastar. She was known all over Europe for her beauty and her intelligence. She exchanged letters with some of Europe’s most important artists and scientists (they are published in Lettere, the collection of her letters that her husband Francesco Andreini published after her death) and she was taken up in four academies. When she dies in Lyon on her way back to Florence from Paris after playing for Caterine de’ Medici at the French court, there was a great funeral with royalties and artists from all over Europe.

But to get institutionalized also had its duties. The dukes and princes that protected the Commedia dell’Arte groups was the politicians of their times. They represented the state and public affairs, even though they were in no way democratic in our sense. They used the Commedia dell’Arte groups for their own political purposes. It was not just to give glamour to their own court that they used the Commedia dell’Arte groups. They could also be used to get things said through them or to acknowledge friendship to other states by sending them to play there. Those nobles that protected Commedia dell’Arte groups could interfere with their repertoire, kick out or punish actors that didn’t suit them.
Those actors still had quite a great freedom, thanks to their high standing, to be in the renaissance. They indirectly prepossess their position by pointing to public and market demands, loyalty to the court or state or simply threaten to leave the court when their contract expires. The better the economic situation a group had the more freedom they could enjoy.
It was also easier for touring groups in general to avoid censorship in Italy sense it was not just one state with one law. A fact that was utilized, and gradually less and less of those laws were obeyed. Since there were just scenarios and no scripts it let the performances to differ from one show to another. That made it hard for the authorities to preview the shows effectively.
By the middle of the seventeenth century it seems that more and more Commedia dell’Arte groups chosen to stand free from any authority when a new market opened among the growing bourgeois.