Accident at the opening and guardian angel

So after rehearsing Gudomliga Ord (Divine Words) with my students for weeks, our opening got canceled. One of the actors suddenly got terrible stomach pains about one hour before the opening and she had to leave the theatre in an ambulance.
There we were, the rest of the actors and me – stranded, empty, with all energy running out. Off course we were also all worried about her, but it seems like something is happening in a situation like this. It is like the focus all goes to save the performances, like a child when a parent gets ill.
So what really happens in a situation like this when all the excitement transforms into disappointment and frustration and all the gathered energy is running out? It seems like shock, as a fist stat – anger, from all the frustration – depression, in lack of energy and grief over a lost performance – problem solving, as soon as the situation get bit more temperate – laughter at the situation, when a feeling of control is gained back. At least I think this was our journey. 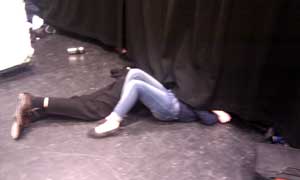 So to the rest of the story: as the Swedish saying says “when in the most need the help is closest” (a real bad translation). In the house I found Caroline Eriksson, one of my old students working on another piece. I asked her if she could rehearse the roles of the wounded actor the next morning. She immediately answered yes, as she always does. (This is not the first time she shows up just when I desperately need help.) So the next morning we got up early, rehearsed with Caroline and – viola – the show was saved.
It is also interesting to see how fast one can rehears a role under pressure. She did it in just two hours and it went really well. Off course the role was already created and adjusted it a bit to fit the new actor, but that doesn’t take away the effort. 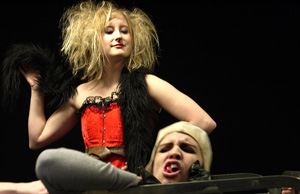 As an epilog I can say that we played the show twice that day and it all worked out fine. There were no great mistakes, the actors put in the little extra and the audiences loved the shows.
Now we are getting ready for touring the show in Norway and the south of Sweden for 11 days and the original actress is feeling better and is joining us.

One Response to Accident at the opening and guardian angel