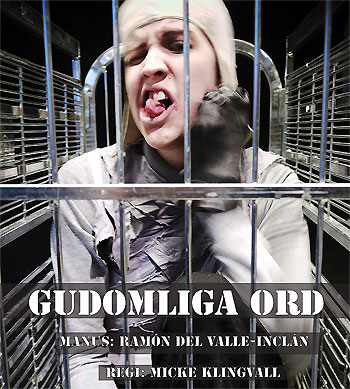 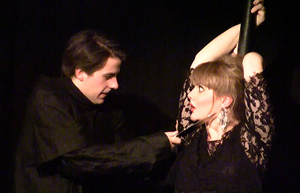 We opened the play 8 March 2013, as one of two final productions for Kulturama’s second year students in Physical theatre that year. (The second one was PIRATER)
At the opening one of the actors became very ill just one hour before the show, so we had to cancel. But luckily one of my former students – Caroline Eriksson – was in the building and she agreed to rehearse the role of Laureano so she could play the part the next day. See HERE.
Later Gudomliga Ord toured, from 16 to 25, March, in Norway and the south of Sweden. And there was also on extra show the 27 March in Stockholm. 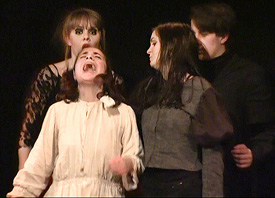 The play is situated in a small poor town in Spain in the beginning of last century. It tells the story about two families fighting over a severe physically and mentally disabled nephew to use a freak when they are begging. One of them (the sacristan’s wife) gets seduced by the diabolic juggler and con artist Septimo Mjau and run away with the boy. Finally the village people find her and just as they are about to kill her for her sins the divine words are told…
The show is questioning things like: How far are we ready to go for money? Where are the limits for abasement? What are morals and what is hypocrisy? 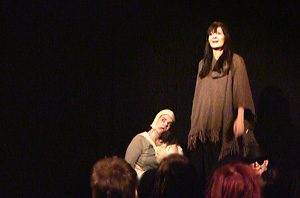 Gudomliga Ord was staged as if it was played in a catholic church, with the actors playing among the audience. It had a very physical approach in its expression without being specifically acrobatic or physically expressive. We followed the tradition of a sort of enigmatic or magic realism that the play was written as.
And we had to warn the audience that the show was not suitable for children under 15 years old. 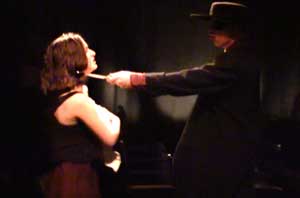