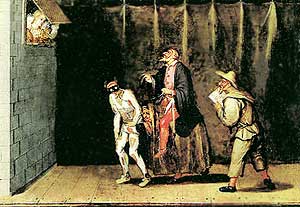 I have always wanted to stage Bancceri’s Pazzia Senile and Saviezza Giovenile (There is an excellent and very funny Swedish translation done by Etienne Glaser) with them, but I never have found the time for it. Even though it is sort of Madrigal Opera it is seems quite easy to solve the problems of choir singing due to the mask technique. The contains in the plot still have the crudeness required and even the music is, at least in my ears, still close to an early Italian folk music tradition, much more than for instance Oratio Veccio who is supposed to be a bit earlier.

It is amazing what voice and movement can do together. Both are two strong expressions that are talking much more direct to our emotions than the simple use of words and combined they can be more than just the sum of the two.
It is a like a Sufi exercise where the student is holding a long stick out from his or her body looking at the tip in order not to get dizzy while turning around as fast as he or she can. When reaching top speed the student yells out load at the top of his or her lungs and voila – it goes even faster without any extra effort.