Commedia Erudita  – The academies and other groups  (Part 2) 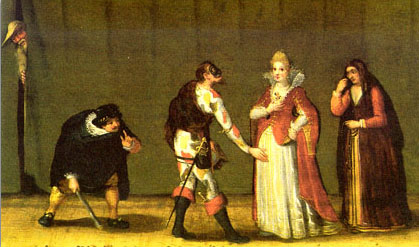 During the renaissance the first literary academies were born. They were – and still is – arranged in democratic order. When women were parts of the academies they were equal members. Isabella Andreini was a member of Accademia degli Intenti and the Swedish queen Kristina started her own academy, Accademia reale, in Rome 1674, after she abdicated from the Swedish crown in 1654.
The academies had as its mission to support the Italian language and its literary traditions against its decay and influence from foreign influence. They studied, practiced and tried literary theories. Rhetorical and improvisational exercises were also a great part of the activities. Improvisation was an art form just as good as any art form in sixteen century Italy and was not a specific peculiarity for Commedia dell’Arte. One exercise (That I still use for Dottore by the way) was to give a specific word to two pedants to hold an improvised lecture from, with different verbal pronunciations, and esoterical interpretations concerning a historical incident. It was also their task to stage the comedies in within festivities and before selected guests. With this in mind it is not so hard to see why the Swedish Academy gave the Nobel price to Dario Fo.
They had names such as Gli Alterati (The Changeable), Gli Intronati (The Astonishing), Gli  Intronati (The Dumbfounded) or Gli Umidi (The Vaporish). The names were inspired from the French medieval romances of chivalry that were often recited and played in the streets. Much of the manners and etiquette that were cultivated in the Italian courts and among the nobles had its roots from it.
Many Commedia dell’Arte groups, especially among the most famous ones, took their names from the same tradition as the literary academies, as: I Gelosi (The Eager), Gli Uniti (The United), I Confidenti (The Convinced) or Gli Accesi (the Burning). Even though the names are from the same tradition they also got a hallmark of courage, aggressiveness and adventure. The used these names, not to make fun of the academies, but to place oneself among the finer culture. 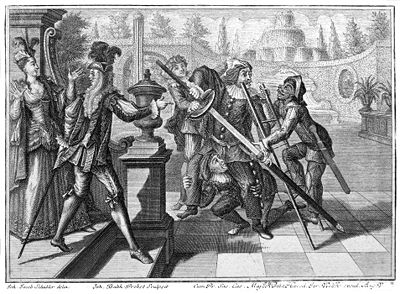 Other groups of actor were so called brigante, meaning roughly “informal assembly of friends”. It was loosely held groups that liked to paint set pieces, saw costumes, and act.
The groups were often commenting on each other in the plays. They also commented on themselves, their own play, the stanze they were playing in or they gave comments to other, modern or antic, comedies. They created a sort of meta theatre where they were playing with the theatre as idea. The shows became a game between the actors and the audience where the audience was supposed to have seen or at least read the plays they were referring to.

Some playwrights had their own companies, like Ruzante in Padua. Most groups where formed as companies, but they were still amateurs, without ambition to be professional.
Ruzante, or Angelo Beoloco as his real name was, is interesting as the most well known in his genre, his way of using dialects and how he wrote actor centered plays with room for improvisation and physical comedy. He created his own fixed types which not have so much to do with the masks of Commedia dell’Arte when it comes to characters. Ruzante took his name from one of his fixed characters, a clumsy, garrulous peasant, who just as Angelo Beoloco came from Padua. Even if his plays took place among peasants and the poor, urban population, he was himself from a rich family and his plays were only intended for a rich and aristocratic audience.