The onomatopoetic, language mimicking, voice illustrating, sound that Dario Fo calls Grammelot was born in France when the Commedia dell’Arte actors where antagonized by the church in Italy during the counterreformation. They turned to Europe instead, but not only to overcome the censorship. They also were also seeking new markets.

Many of the Commedia dell’Arte actors knew other languages, but everyone who has tried to improvise in another language – even if they are quite good at it – knows that it takes quite a long time to reach the level and speed and to get the associative ability to be totally free in the new language.
Here is a text from Ottonelli from 1655 about when Zan Ganassa came to Spain about 100 years earlier:

“…in the year 1644 I Florence I heard from a Florentine, a highly intelligent man and very knowledgeable on Spain, that about the year 1610, finding himself in Seville, he heard from certain of his friends, elderly men and eye-witnesses, that the Italian actor Ganazza, who was very diverting in his witticisms, went went there with a company of Italian players andn began to act I our [improvised]style. Although he and all his other colleagues were not fully and perfectly understood, nonetheless by virtue of the little that was understood he succeeded in making audiences laugha great deal and earning much money in those cities, while the Spaniards learned from his example to make comedis in their own way, which they had not done previously. All this I take to be true, and belive that just as Ganazza sought toprovide utility and pleasure with his delightful witticism and by performance free of all obscenity, so the Spaniards learned from him to make refined rather than obscene plays.” 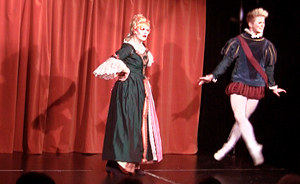 It was Jauques Copeau and his Vieux Colombier who first picked up the term Grammelot in the beginning of the twentieth century. But it is Dario Fo who made it his trademark today.

Grammelot is an onomatopoetic, make-up-language that we create with the aid of gestures, rhythm, timbre, melody and sounds as if it was a real language with real words. There is no overall way how to use Grammelot. Each actor has to use his intuition. It differs from gibberish in that it often mimics another language in sounds, melody, and rhythm and so on and that it also allows a word here and there from another language. Dario Fo says that he uses about 10 % real words.
But we can also create our own words. Then we have to make them, either onomatopoetically or logical, understandable or/and present them at an early stage in a play. The advantage of using self-made words is that they are understood internationally. 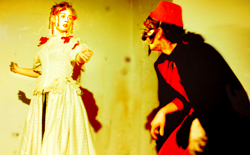 Grammelot and gibberish has also been to great help when it comes to improvisations. It helps the body to start moving and the voice to start communicating instead of using the words. (See Size and visual narrating.)The words have a nasty way to set off the brain and demand an intellectual process, which decelerates the bodily and vocal reactions of the actor. In that way it blocks the free expression of the actor when he is trying to be smart instead of being expressive.