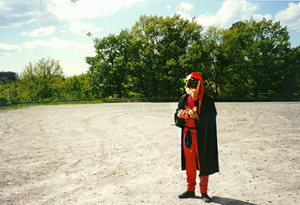 Commedia dell’Arte is always played with a sense of distance. It comes from the stylizing of the mask, the size of play, the use of mask, loose phalluses and other deformities of the body, the actor’s energy and the simplicity of the acting. Even the performance itself contributes to create distance and stylizing, with its elements of singing and music, acrobatics and dance. We can also see Commedia dell’Arte as physical storytelling where each mask tells its story rather than act it.

The more we know about a role the more we share its feelings. We may laugh when a big, fat man is trying to fit inside his too small sports car. But as soon as we know more about how he suffer from his adiposity and the reasons for the complexes that made him buy just that car we don’t laugh anymore. In the same way we can chose to see King Lear as a big, stupid, pompous clown with a ridiculous idea about justice, who falls for his own ideas. 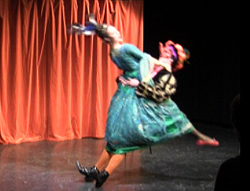 So distance is important not to let us, as an audience, have too much sympathy with the masks. The masks are involved in human feelings when they love, suffer, have lust, hunger, envy and so on; feelings that we can and should recognize. But as since the masks always are stylized and “bigger than life” they become reduced as humans. The masks become archetypes – defined by their looks and character. As an audience we don’t put ourselves in their place. Instead we create a distance that help us tolerate – and laugh at – how the masks get robbed of everything they own, trying to commit suicide, starve or get beaten up.

One Response to Distance as acting style in Commedia dell’Arte