The struggle between man and wife and between the young and the old often mix together. Most of the time it’s about sex; sometimes it is about power; but it always ends with the old – who often are a man – gets defeated. 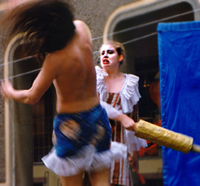 The combat is one of the things that define all Vulgar Comedy versus the official theatre that almost never actually brings the combat on stage, and never shows it physically, even though it might very well be about a combat, as in Aeschylus or Strindberg.

3 Responses to The comic, dramatic combat in Commedia dell’Arte