A definition of Low Comedy

What is considered “low” in comedy is when we laugh at basic things like life and death. Funny sex, insults, excrement, violence, gluttony, social rebellion and so on are expressions of the comical side of life and death.
While the high browed humor merely smiles at witty word jokes about wordplay or fouls in etiquette, low comedy laugh out loud about the important things in life. 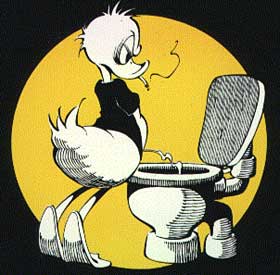 One great mistake many people do is to take low comedy for bad comedy. This misunderstanding comes from the attempts from the elite to discredit everything that is low or vulgar as bad. (See HERE) Many of us follow that formula of good and bad in comedy in order to differentiate out what is good and bad and to place oneself on the good side.
A lot of what is low comedy are bad, but that has nothing to with the genre itself. It is rather because of the values referred to it. Since the best performers are afraid to be considered bad they don’t want to be associated with low comedy. That leaves the field open for those not-so-good performers to play without competition.
Very often it also is amateur actors that are accused for “low” comedy. Maybe that has to do with that the amateur actors have the possibility to what they want without having to look at financial aid or the box office and have no prestige to lose from their reviews.  And maybe that leaves them to research what they really are interested in – the important things in life in a comical context.

2 Responses to A definition of Low Comedy