But except from that about “the material-bodily lower” (See PART 1), Mikhail Bakhtin also states that common people at the time neither trusted seriousness nor people who were serious. They were a threat since the only ones that benefited from seriousness were those who had the power, who came with violence, who were the hypocrites, who’s agenda included the use of someone else – in short: those who had the possibility to make a career.
Now first: to make a career one has to climb on top of others. The satire that Vulgar Comedy points to those who are climbing threatens the climbers and may very well dethrone them as it pulls down their pants by ridicule them and show them as they really are or/and what they really have done.
Second: people who are busy making a career cannot afford to have people laughing at them. Part of the idea of making a career is to be an important, serious person with power. It is not possible to hold up that face when the mockers are pointing their fingers at you exposing your ridiculous sides.
Not that it is not the evil or immoral sides that threatens authority, but the ridiculous. The jesters may very well tell about all the bishop’s mistresses, but his power is really threatened when it becomes known that he can’t get an erection.
This goes for today as well as for the Middle Ages.

Even today (and from sometime in the eighteens century) most people in the western world have got the possibility to make a career. This makes a lot of us disaffiliate from Vulgar Comedy and everything that is considered “low”, since it is associated with people of the lower classes and less fortunate from whom the career is meant to segregate us.
Therefore it is no longer any use to forbid, ban or censor “the low” in Vulgar Comedy today. We have already deposed it ourselves, or at least disparaged it and consider it ugly. We all know that there is always some shame involved in laughing at jokes about farts, sex or funny violence. It is what we only laugh at whispering to our nearest friends. 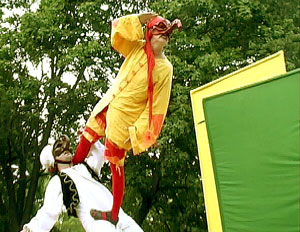 Jokes of social rebellion or satire are denied when it goes “too far”, especially if pointed at politicians, celebrities or other persons of power that we like.
Hillary Clinton was never mocked when Bill was “not having sex with that woman” in the Oval Room (maybe he couldn’t get it up). In Sweden many people gets very offended when anyone jokes about our King’s stupidity or immorality (See HERE). The same goes for Ingvar Kamprad (IKEA’s founder and Sweden’s richest man).
These very prominent persons are all regarded as victims. Their lifestyles are the goals of our careers. We can see ourselves in their position, even though we never even will be close to it. Therefore they have to step way over the line before we are allowed to mock them. So, as our careers are built on the dreams of our future life, we cannot mock those prominent persons as they are who we wish to be, and we would than mock ourselves. Neither can we be associated with the “low” and the lower classes, since we want to escape from it.

One Response to Low Comedy in Vulgar Comedy (Part 2)