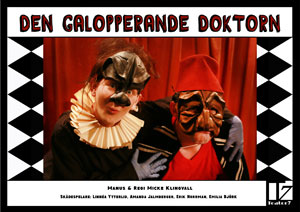 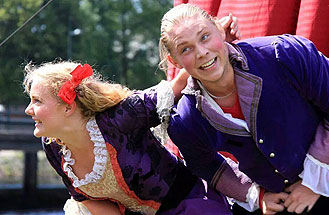 Den Galopperande Doktorn opened in Kulturhuset Stockholm at Stockholm Pride festival 29/2014. Then it continued touring in the south of Sweden – including The medieval week in Gotland – for two weeks.
The outdoor rehearsal period was at times rather chaotic with me getting lost to the rehearsal space, dogs and people passing by and at times extremely heavy rains. 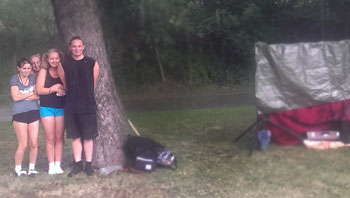 This was the second show that I directed with Teater 7. The first show Pirater (Pirates) was rehearsing while the actors were still students at Kulturama, but as soon as they opened the show it belonged to the group. 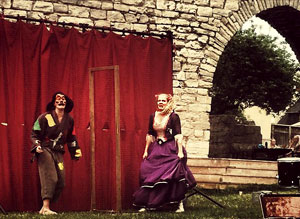 The plot is a classical Commedia dell’Arte, with two lovers wanting to reach each despite their obstacles, servants trying to survive and getting out of trouble, old men driving their egoistic schemes and so on…  It is played with visual tricks, music and acrobatics as incorporated disciplines. And off course, it was filled with gags, good spirit and laughter in the spirit of Commedia dell’Arte.