The scenario in Commedia dell’Arte (Part 2) 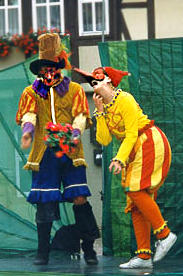 The scenes in a scenario changes as a new mask enters the stage, but not when a mask leaves the stage. Let’s call this Italian scene division in contrast to French scene division, where they change scenes in both entries and exits. It is written in a way that it is easy for the actor to wait in the wings for his or her cue even though what is happening on stage is improvised. .
Here is a modest example from a show we played with Kompani Komedi in 1998 it was called AAARRGH!!! – Capitano Catastrofo Collosalle, it was played all over Europe so we did use grammelot instead of words (it might be a bit to detailed to be representative):

If a scenario shall be easy to work from it has to be divided into smaller parts, chronological and through context. If not it may be a big blur of it all. One way to do that is to ask oneself: “who is doing what, with who, to whom, when?” When writing a scenario. In this way we can easily see what, in the scene, constitutes a one simple plot, so that the actor don’t have to bother about more than one action at the time.

A traditional Commedia dell’Arte scenario contains three act, while a Commedia Erudita scenario usually was five acts, as a heritage from Plautus and Terence, and the ancient drama. That was probably only when played in the great castles and palaces, or when played in a hired stanze or theatre. It cannot have been the case when played in the streets, since it would be impossible to take a break in between acts.
It is useless to play a show more than 20 minutes and definitely more than 30 minutes on the streets. It was surely different during the renaissance. Today people don’t have the time to stop unplanned to just watch a show. Besides it is much easier both physically and economical. If we have one or more short shows we will both be able to play more plays a day since it takes less energy and it give us the possibility to move from one place to another if the first is not profitable. See also HERE.

Back to Part 1
Back to Performance structure

One Response to The scenario in Commedia dell’Arte (Part 2)