The church censoring Commedia dell’Arte ( 1 of 2) 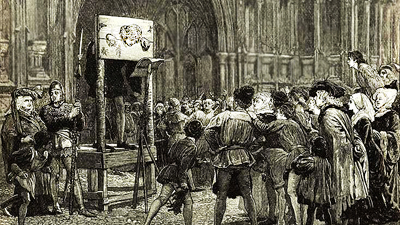 It was not easy for Commedia dell’Arte groups to make fun of religion and the church during the latter part of the sixteenth century, after the Council of Trent 1545 – 1563. It was a lot easier during the middle ages and the early renaissance when a more popular culture prevailed. The parody of the church we can find in early Commedia Erudita plays and in medieval popular jesting are not found at all after the middle of the fifteen hundreds. In any case there are no traces after it in Commedia dell’Arte.
The power of the church grew strong and those who wanted to keep their heads in place better stick to the church’s rules. But we must also have in mind that most people at the time were awfully religious and they would not accept their church or religion to be made fun of. As a parallel today we can just think of the popular demand among many Muslims when Salman Ruchdie wrote The Satanoic Verses or when Jyllands-Posten published the Muhammad cartoons.
After the Council of Trent, when the Catholic Church attacked the liberal attitude that was accepted before, theatre and especially Commedia dell’Arte became criticized. This happened even though the church itself contributed to the rebirth of theatre with its passion and mystery plays and even the diavolas. Commedia dell’Arte group, but without women, were even invited to the Vatican.
The theatre was dangerous for the church, not just because it mocked and therefore questioned power structures, but also since it invited to a fairy world filled with dreams and fantasies that could tempt to immoral life instead of a possible place in paradise in the afterlife. Just as some moralists today they were afraid that half naked women, infidelity, girls with to strong will, luxury and exotic clothes, an lighter way of living, rebellious and self-interested servants, men in women’s clothes and women in men’s clothes would have to strong impact on weak and errant persons.
Naturally it was tantalizing to flee reality and forget ones mortality for a while with the aid of these fantasies. But for the church to enforce its power it was essential that people would seek a better life in heaven and not on earth.
They understood that the theatre was a more powerful tool to reach out to people than other forms of art. But the critical warning of the sinful and dangerous expressions in theatre that came from cardinal Carlo Borromeo – archbishop of Milan – the man who led the witch hunt on Commedia dell’Arte groups and actors, was probably not meant to be such a compliment as this (freely translated by Dario Fo):

“How much deeper doesn’t that who reach the eye touch the soul then what we read in a book! How much worse doesn’t the word that are said from a voice and supported by gestures hurt the young, then dead words published in a book! The Devil spreads his vermin through the works of the actors” 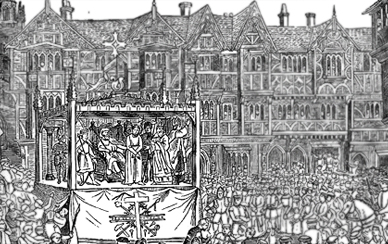 The church and the moralists could not totally condemn all Commedia dell’Arte since it was many groups had reached a social acceptance at the courts and were under the protection of princes and dukes. They could also rely on older Commedia Erudita and the ancient tradition, as most moralists rather see a dead tradition than a living exertion. The Church supported the growing hierarchies among the Commedia dell’Arte groups. They discarded the popular influences from the squares,  the markets and the Carnival. The parts that Michail Bachtin called the Grotesque Realism became looked on as “low”. It is the same contempt as we still can see among the theatre elite who dismiss performances as simple or below-the- belt in order to differ it from “real” comedy. With “real” comedy they almost always mean literary comedy. 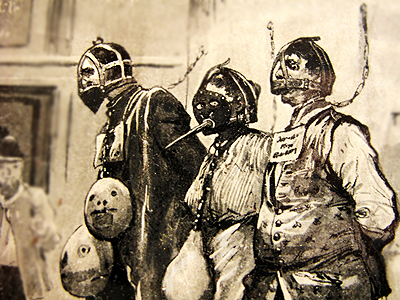 The Church and the moralists accused also, with the same snobbism, the poorer Commedia dell’Arte group, that played in the streets and in stanzi, for being commercial. And that they degenerated to perversion and libidinousness to satisfy the taste of the people. Needless to say, the taste of the people were naturally reprehensible.
We should not hide the fact that Commedia dell’Arte are built on sex and violence, as most of the world drama in more or less disguised, but the erotic fantasies and mutilation of the power is never destructive. It is the merry popular carnival traditions, with its allowing character, it’s turning conventions and traditions up-side-down, it’s resurrection of the new year that are mirrored in the pranks and mockery in Commedia dell’Arte.
The Church did not only criticize the theatre as phenomena. They also criticized the actor’s private life. Let us read from an example from one of the most hostile opponents to Commedia dell’Arte, Petrus Hurtado de Medoza from 1631:

“The woman are always, or nearly always shameless. Players enjoy a free life together, and the women are not segregated in separate rooms. Thus the men can often see them when they dress, undress or comb themselves, and at times when they are in bed, or when they are half naked. And they are forever exchanging indecencies.
The Husbands are cowards and the women do not respect them, nor do lovers fear them.
Often the women are prostitutes, and rapacious. Often players find themselves performing together, and in order for a woman to effect a quick change and take on a new role a man helps her to undress and then dress again. What more can one say? A young actor, for example, will help an actress put on her shoes, and will tie the lace on her leg, and will not just do this on the stage, but also near a bed, those who are familiar with troupes and players are witness to this, and by them I have been told it.
On stage, players portray the love exchanges of characters in plays and such exchanges between men and woman act like burning darts. Players likewise embrace squeeze hands, kiss, fondle each other, and make secret assignations on stage. Why should they not perform, for real in the bedroom what they feign on the stage?
Thus I conclude that these many and frequent opportunities bring some grave danger of adultery and other crimes, and it is thus impossible for such people to avoid immorality […]”