The end of the heydays of Commedia dell’Arte (Part 2) 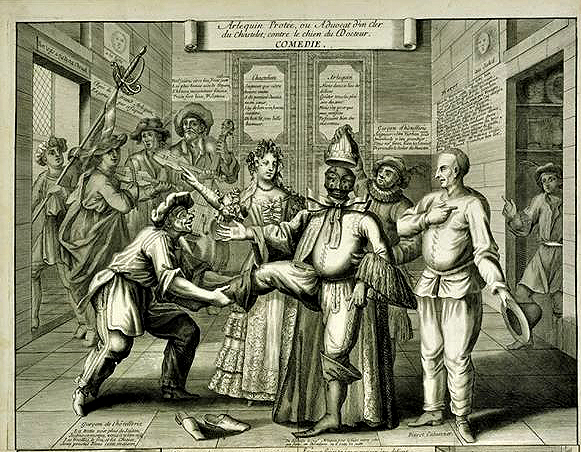 Tristano Martinelli was the first to use his role also in a private context. He became a sort of court jester in aristocratic and royal circles and he was used, just as the celebrities of today, to give starry luster events and openings. This also gave him a higher position in comparesing with his colleagues. His children had the French king, Henry IV, as godfather and later he followed Louis XIII to Fontainebleau and back.

Others are following in his footsteps. Many of them became more or less included in the aristocracy. For example Pier Maria Cecchini became ennobled in Vienna, and later his son became ennobled in Germany. This way of showing of oneself is also the beginning of the end of the great Commedia dell’Arte groups. The rivalry between and within the groups is increasing as social openings are possible. They are desperately trying to stick to their positions in the social circles they invited to.
The actors work hard to be seen, at any cost. It leads to the weakening of the unity within the groups when star acting and diva behaviors take off. The element of group theatre that was so important disappears. As the groups, in their eagerness to win social status, allow themselves to be an instrument for the principalities or the impresarios they serve, and therefore lose their independence. 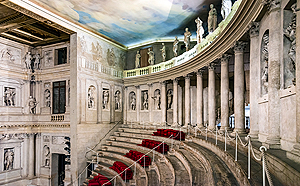 Commedia dell’Arte became commercialized. As early as the seventeen century Italy got its first impresarios as the Commedia dell’Arte groups got a bigger market. The very first impresario was Leone de´Sommi from Mantua. He sold Commedia dell’Arte as soon as 1567. But the impresarios did not become influential until the seventeenth century. They first wrote short contracts, but later the contracts could last over several years. The groups and actors became less dependent of their old patrons, but instead they became more dependent on their impresarios.
Even the names of the groups changed in the later half of the seventeenth century. They took names after their leaders as in Giuseppe Bianchi’s group or Fiorelli’s group.

As the actors gain a higher social status they also disassociate themselves from the impulses and inspiration they gotten from the streets. The plot, the jokes, the masks, the notions does not reflect the common man any more. Instead of joking with the people in the streets, the Commedia dell’Arte groups start joking about them instead, since the no longer are taking part of the life in the streets where the people are. (See also The Indian adventures)

Many Commedia dell’Arte groups stopped touring as they began building theatres, and therefore the influence from abroad, the contacts with other Italian towns and the network of Commedia dell’Arte groups that was constructed. We can easily imagen that, then as now, most great ideas start in small poor groups and are exploited by institutions and greater groups that have resources and access to media.

The post started in Part 1 and continues in Part 3