The Street as Venue (Part 2) 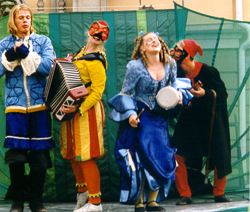 When it comes to Commedia dell’Arte and other masked theatre that are using entrées and sorties we need a backdrop. We don’t want the actors to vanish away in a distance.
Since it is easy for the wind to make the backdrop to giant sail it is important that the material in the backdrop is not to dense so the air can go through. In other cases one can do “mouths” in the backdrop. (Just make sure to make them happy mouths.)
The backdrop should be at least 2,5 meter tall, so that it really make a background for the actors. We must have in mind the angle when the spectators are standing on the ground while the actors are up on the stage. 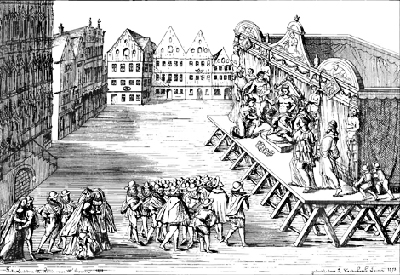 The placing of the stage is also important when playing in the streets. Every town and every street corner looks different. Therefore it is not possible to put up any general rules for where to put up the stage, but here is some pieces of advice that will help to be seen and heard:

See also:
Carnival and the popular feast
The mask, costume and stage
Allting på…! (Everything on…!)

One Response to The Street as Venue (Part 2)