Music as a discipline in Commedia dell’Arte 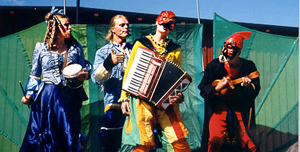 I the very first descriptions of Commedia dell’Arte shows one could read about the use of music. It had several madrigals for four or even five voices. Many of the first operas were based on Commedia dell’Arte as well, with the use of mask, plots and crude lazzi.
We usually start with an opening song that gives a sort of atmosphere of fest and joy. It also presents the masks, the plot and gives a feeling for the sort of play that will happen. The music also involves the audience physically; they are clapping hands or sing along. The music in itself gives a feeling of involvement.
In the rest of the show the music is used in songs where the masks get the chance to express their feelings or point of views, or in choirs or antiphons that helps moving the plot forward. We also use the music instrumentally as mod music, background music or sound effects. In all these ways to use the music it is describing and clarifies or emphasize what is happening on stage. The show ends in a song that sums up the plot and returns the mood to the initial atmosphere of a fest. 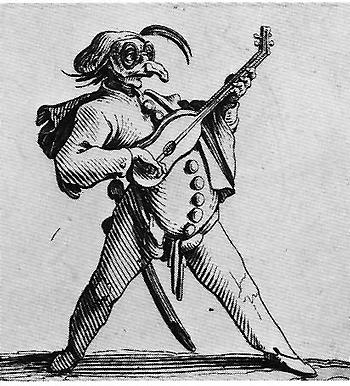 2 Responses to Music as a discipline in Commedia dell’Arte